If you’ve been watching Tile Miner from the beginning you know that the graphics have gone through a few revisions. If you’re interested in hearing the story you can read this entire post. If not, just know this: We are updating all of the graphics to a higher resolution! Here’s a screenshot to give you just a peak at what we’ve been working on for the final release:

THE HISTORY OF TILE MINER PIXELS
OPEN SOURCE
When we first launched Tile Miner in early access we used all open source graphics. Most of these were from the liberated pixel cup competition on opengameart. We liked these graphics just fine but they weren’t original. In fact, I often go back and see old comments that accuse us of stealing these graphics from other games. I always get a good chuckle out of that.:)
Before we entered early access on steam we of course had to go through Steam Greenlight. During that process we read over 400 comments and one of the biggest bits of feedback we got was “change the graphics”. So we did!

CONTRACTED GRAPHICS
Finding an artist was difficult. We talked to quite a few people about doing it. The guy we wanted from day one wasn’t available. We ended up settling on a guy whose work was ok but he was slower and more expensive than what he had originally quoted. It was a disappointing experience overall. The cost was piling up but the ideas I had for the future of the game would require a lot more artwork and I knew it was going to be too expensive. So I tried something…

CURRENT
I was getting better at pixel art so I tried converting some of the graphics we had paid for to be 16×16 tile sizes instead of 32×32. The detail went away but the good news was that I could draw these graphics by myself. So I overhauled all the graphics we had to be 16×16 tile sizes. During this time I got better at pixel art but I always felt my skills were lacking. This is what the current state of the game looks like. It’s clear what’s going on but is less detailed than I’d like. There are some pieces I love and others I hate.

NEW GRAPHICS
As my wife and I discussed the plans for what the final release would look like in terms of gameplay, I was frustrated by what the game looked like currently in terms of graphics. I took the time to estimate what it would cost if we could get the guy we originally wanted to do the graphics to do everything. Once coming up with that ballpark, and confirming that the artist was available, we decided to invest the money and make it happen in order to make the game we really wanted to make. For the past month or two we’ve been working with Tom Filhol (https://tfpixel.myportfolio.com/pixel) to convert every graphic in the game to a 32×32 resolution. For the most part everything will be familiar. It just looks more detailed. I’ll be sharing screenshots as more and more graphics get finished. I’m proud of what we’ve got so far and excited about what’s coming next. 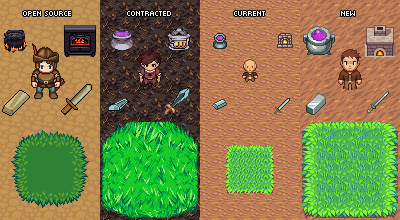 And finally this is the major reason we can’t do more updates until final release. Converting the graphics to this size initially broke everything. We’re still using pixel doubled graphics all over the place in the game. Until all the graphics are in, we can’t put anything out. By the time they’re finished, we should be about finished with all of the code. So the next release, will be the final one! I hope you’re as excited about this change as we are!